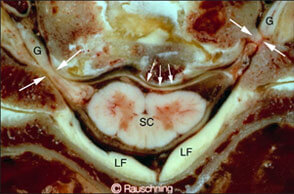 A herniated disc, also known as a "ruptured" or "slipped" disc, occurs when the inner core (nucleus pulposus) of the intervertebral disc bulges out through the tough outer layer of ligaments that surround the disc (annulus fibrosis). Back or neck pain can arise from a ruptured disc or this tear in the annulus fibrosis. If the protruding disc presses on a nerve, pain, numbness, or weakness may occur in the area of the body that is served by that nerve.

Pain from a ruptured disc characteristically is intense and abrupt in onset. Disc herniations, or ruptured discs, may also cause pain in the arm or the leg without corresponding neck or back pain. Pain from a ruptured disc can be aggravated by forward or lateral bending, and is typically relieved by lying down and resting. Leg pain can lead to a painful gait, with weight being transferred primarily to the unaffected leg. Herniated Disc Treatment Houston

An MRI is the test of choice for diagnosis of a herniated disc. A CT scan (CAT scan) with myelography (a spinal injection of contrast dye) may sometimes be helpful for visualization of the bony anatomy of the spinal column and may be necessary for patients unable to undergo an MRI scan. Electrical tests such as electromyography (EMG) may also help confirm injury to a nerve caused by disc herniation or bulge.

Treatment for herniated discs is often conservative and nonsurgical and include options such as medication, activity modification, physical therapy and steroid injections. Patients may limit the amount of bending, lifting and twisting in order to decrease the amount of stress and pressure on the lumbar spine, which may increase the pressure on the affected nerve root. Medication for slipped disc treatment can include anti-inflammatory drugs, analgesics and muscle relaxants. Some patients may also benefit from an anti-inflammatory spinal injection as part of their herniated disc treatment to lessen nerve swelling and irritation caused by the damaged disc.

Send Us an Email

Find us on the map